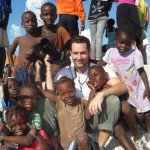 Wyatt Gallery, a person not a place, was raised in Philadelphia and received his BFA from NYU Tisch School of The Arts in 1997. He is the recipient of a Fulbright Fellowship, the PDN 30, the PDN Rising Stars, and 25 Under 25 Up-and-Coming American Photographers by Duke University.

His photographs are in numerous public and private collections such as the Museum of Fine Arts Houston, the George Eastman House, the New Orleans Museum of Art, the Worcester Art Museum, Comcast, Twitter, and American Express. His work has been featured in Esquire, Departures, Condé Nast Traveler, Mother Jones, The New York Times, Oprah’s OWN Network, and NBC, amongst others.

Wyatt was an Adjunct Professor at the University of Pennsylvania and continues to lecture at New York University, the School of Visual Arts, the New School, and more. His first book Tent Life: Haiti was featured in the Moving Walls 19 exhibition at George Soros’ Open Society Foundation and has sold out of the first edition. His most recent book #SANDY was selected for “Best Photo Books of 2014” by American Photo magazine. 100% of the royalties from both books have been donated to support rebuilding efforts and have raised over $50,000 to support communities in Haiti and New York City.

Wyatt recently exhibited his new series, SUBTEXT, at Foley gallery in New York City, which received reviews in The New Yorker, PDN, Feature Shoot, and more. His forthcoming book Jewish Treasures of The Caribbean will be released in the Spring of 2016 by Schiffer Publishing.