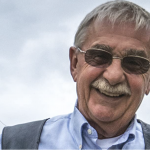 Born in Puerto Rico, Victor Gutierrez moved to Bayonne, NJ at age 12, and began his advertising career in 1970 at J. Walter Thompson where he rose to become Global CFO.

In 1990 he joined Young & Rubicam Advertising (Y&R), where he became Vice Chair and General Manager of the agency’s Latin America operations. He took a brief break and in 2004 Victor was back in advertising serving at Y&R as the Chief Operating Officer on the Colgate Palmolive account. He retired in 2014 and moved to San Miguel de Allende in Mexico with his wife Susan Chamberlin, also a former ad exec. Together they have built a thriving agro-tourism business out of their “Finca Luna Serena” which specializes in the production of the finest quality olive oil.

On this episode, Victor shares his one way ticket to San Miguel de Allende. He highlights the charms of the town, how he developed his thriving olive oil business from scratch, and the serenity that is “Finca Luna Serena”. Plus, he offers his thoughts on crafting a new life, the importance of risk taking, and what has inspired him to write no less than six books (and counting)!