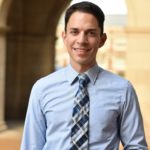 Timothy J. Bono, PhD, is a Lecturer in the Department of Psychological & Brain Sciences at Washington University in St. Louis where his teaching and research focus on positive psychology and college student development. His work has been featured in a number of media outlets including NBC News, CNN, Fast Company, and the Associated Press.

Over the last decade, thousands of students have taken his popular courses on the Psychology of Young Adulthood and the Science of Happiness. He summarized the research from those courses, along with how his students have put that information into practice in their own lives, in his new book entitled, “When Likes Aren’t Enough: A Crash Course in the Science of Happiness.”

When Likes Aren’t Enough: A Crash Course in the Science of Happiness