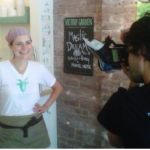 In 2007, Sophia Brittan founded KitchenCaravan.com, a healthy online cooking show, where she developed recipes and hosted the program.