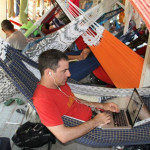 A graduate of Yale and Harvard’s Kennedy School of Government, Seth began freelancing for the Times while working for the city of New York.

He eventually gave up his day job to devote himself full time to writing for the Times where he covered the Bronx, wrote the Weekend in New York column in the Travel section, and ultimately took over the Frugal Traveler column in June 2010.

He also taught a journalism course at New York University School of Continuing and Professional Studies.

In October 2014, Seth will be debuting a “how to” video series in Portuguese, for Brazilians visiting New York City.