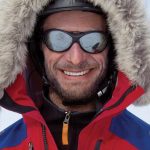 In 2017, Men’s Journal named Sebastian Copeland one of the world’s 25 Most Adventurous Men of the last 25 years. With approximately 5,000 miles under his skis in the polar regions, Sebastian has led numerous expeditions to document the endangered ice, reaching both the North and South Poles on foot. He was four times named Photographer of the Year and has addressed the U.N., governments, universities, and Fortune 500 companies to warn of the systemic transformations taking place in the polar regions and their geopolitical consequences.

In 2019, Sebastian Copeland was awarded the National Order of Merit by French President Emmanuel Macron. He is a fellow of the Explorers Club and spent 15 years on the Board of President Gorbachev’s NGO Global Green USA.

Antarctica: A Call to Action