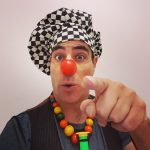 Nimrod studied his craft at Ecole international de théâtre Jacques Lecoq in France and at the Kiklos Teatro in Italy. He has a BA in Theatre from Haifa University in Israel.

To mark our show’s 10th anniversary , we’re featuring a special series – a “one way ticket to optimal mental, physical and spiritual well-being”. On this episode, Nimrod shares the power of medical clowning and how it gives emotional support during times of trauma. Nimrod and his fellow “Dream Doctors” are now participating in bringing smiles, support and hope to Ukrainian refugees in Moldova and Poland. He joined us on the line (from the Warsaw airport awaiting his flight back to Israel) after completing his work there.

If you’d like to support Dream Doctors in their emergency relief missions for Ukrainian refugees, click here: