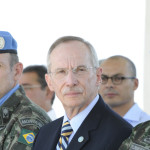 Mr. Edmond Mulet has most recently been serving as Assistant Secretary-General for Peacekeeping Operations, since 1 June 2011, a function that he had previously held from 2007 to 2010. In this function, he has helped oversee and manage operations on four continents, in a period when peacekeeping operations reached historic heights in levels of deployment, troops and police contributors, budgets and complexity of mandates.

Mr. Mulet has served twice as Special Representative of the Secretary-General (SRSG) and Head of the United Nations Stabilisation Mission in Haiti (MINUSTAH), most recently in 2010-2011. In 2010, he deployed to Haiti in the immediate aftermath of the January earthquake and led the United Nations’ contribution to the country’s recovery, from the provision of humanitarian assistance to reconstruction to the holding of presidential elections. During his tenure in MINUSTAH from 2006 to 2007, the Mission worked in close partnership with the Haitian authorities and international partners to make significant improvements in the country’s stability and to undertake key institutional reforms.

Prior to his appointment with the United Nations, Mr. Mulet served his country as a diplomat and a legislator, having been posted as Ambassador both to the European Union and to the United States, and having served as a member of Guatemala’s National Congress for some 12 years, including one term as President of the National Congress. During his years in the legislature, he was intensely involved in the Central American peace process, the Esquipulas Accords and the Guatemalan Peace negotiations.

Mr. Mulet was educated in Guatemala, Canada, the US and Switzerland. In addition to his public service, he worked for many years as a journalist and as a legal counsellor to public institutions and for the private sector, including as manager of several private enterprises and as senior partner in a legal consulting firm. Born in Guatemala in 1951, Mr. Mulet is married and has two children. He is fluent in Spanish, English and French, and understands Portuguese and Haitian Creole.