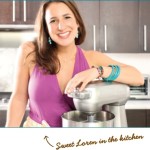 Loren Brill started experimenting in her mother’s kitchen in 2007 with truly wholesome cookie recipes after overcoming cancer. She was determined to maintain her lifelong passion for delicious, first-rate sweets while eating as natural, unprocessed ingredients as possible.

In 2011, Loren Brill entered the Next Big Small Brand competition, a contest that seeks to identify promising artisan food businesses, and won that too (including the People’s Choice Award).