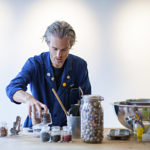 Since the beginning of his career, Lior Lev Sercarz has worked closely with chefs from around the world, developing custom blends for them and for other customers with all levels of cooking experience. In 2012, he produced a cookbook entitled The Art of Blending, which features 41 blends along with recipes and cooking tips provided by renowned chefs and culinary minds including Gail Simmons, Daniel Boulud, Eric Ripert and Apollonia Poilâne. His second book, The Spice Companion, is a distillation of his 30 years of experience. This illustrated guide to 102 spices, complete with blends and recipe ideas was published by Clarkson Potter in November 2016.