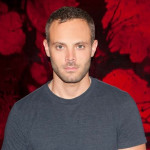 Blood, procured from a slaughterhouse, is the primary medium in Jordan Eagles’s works. Through his experimental, invented process, he encases blood in plexiglass and UV resin. This preservation technique permanently retains the organic material’s natural colors, patterns, and textures. The works become relics of that which was once living, embodying transformation, regeneration and an allegory of death to life.

Jordan Eagles uses various mark-making methods, including layering the blood at different densities as well as heating, burning, and aging the material. Copper, a conductor of electricity, is sometimes mixed with the blood, imparting a unique, fiery energy. Blood-soaked gauze, stretched over the surface, creates another textural layer that serves as a map of memory and homage to ancient wrapping rituals. In some instances, blood that has decomposed for years forms dense masses that are ground into dust and tossed into the works, as a sign of passing and change.

When lit, the works become translucent, cast shadows, and project a glow, appearing as if they are illuminated from within. The materials and luminosity in these bodies of work relate to themes of corporeality, mortality, spirituality, and science—invigorating blood as sublime.

A 1999 graduate of New York University, Jordan’s work has been exhibited extensively throughout the US and can be found in important collections throughout the country. The New York Times, Time Magazine, New York Magazine, the Huffington Post, Time Out Chicago, The San Francisco Examiner and countless other media outlets have featured Jordan and his striking paintings.