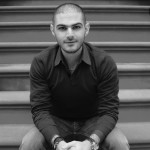 An Art Director/Designer based in New York City, Joe specializes in digital media. He graduated with distinction from the American University of Beirut with a BFA in Design and an MFA in Design and Technology from Parsons in New York.

Joe Daoud believes in using the creative process to promote cross-cultural dialogue, leaving traces of Latin and Arabic typography and design wherever he goes. You can spot some across 3 continent and in such locales as Paris, Beirut, Italy, Abu Dhabi, Bahrain, Qatar, Dubai, both coasts of the US, and of course the infinite on-line universe.

Heavily influenced on the diverse cultures and languages he was brought up with, Joe’s favorite dish in fact is a stew of serifs and sans-serifs. As traditional Mezze goes, you can always drop by for a sampler. Find Joe on the 5th floor of Euro RSCG in New York.