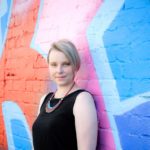 Jenny Buccos is a multi-award winning director and producer. She is the founder and creator of the ProjectExplorer education series and an agent for global citizenship.

In 2003, before the existence of YouTube or widespread online video, Jenny founded ProjectExplorer.org as a means to educate children and families about global cultures and histories. To date, she has directed and produced more than 500 webisodes. Under her direction ProjectExplorer.org reaches a global audience of over 6 million viewers.

Jenny is a three-time recipient of the prestigious GOLD Parent’s Choice Award for Excellence in Educational Programming. She is a 2010 recipient of the National Award for Citizen Diplomacy; honored alongside Academy Award winner Robert Redford for her exemplary work as a citizen diplomat. In July 2012, she was named a White House Champion of Change.

Jenny’s work has taken her to more than 70 countries. Currently, she is filming a family-focused ProjectExplorer TV series with Kari Byron (Mythbusters) and the Intuitive Content for broadcast in spring of 2019. She serves as the Show’s Creator and Executive Producer.

Jenny would love to hear from you! You can email her at: jenny@projectexplorer.org