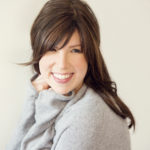 Known as the “Jewish Rachael Ray” (The New York Times) and the “Queen of Kosher” (CBS) best-selling author Jamie Geller is the Founder and CEO of Kosher Network International (KNI), publisher of JOYofKOSHER.com and the award-winning Jamie Geller’s JOY of KOSHER magazine. She is also host of the Chanukah Cooking Special with Jamie Geller on PBS and Create TV.

Jamie is a regular on the TODAY show and has appeared on ABC, NBC, CBS and Martha Steward Living Radio, and has been featured in Forbes, Family Circle, Cosmopolitan and the Chicago Tribune among many others.

One of the most sought-after Jewish food and lifestyle experts worldwide Jamie Geller and her husband have six super kids – which gives her plenty of reasons to get out of the kitchen – fast.

Quick & Kosher – Recipes from the Bride Who Knew Nothing