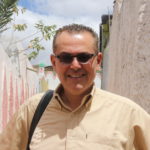 Ihab Zaki is the President of Spiekermann Travel Service, a Michigan-based travel agency which since its founding in the 1940’s, has established its reputation as being a leading operator of private and group tours to some of the world’s most exotic and least known locations. Their claim to fame is for running adventures to rather dicey and scary destinations. The company’s clientele has mushroomed through the years with many guests becoming repeat customers. In fact, a few have even taken 20 or more trips with Spiekermann!

Today, Spiekermann’s repertoire includes adventures to all of the Near East from Morocco to as far as Central Asia, plus the Balkans and little visited countries in Africa and South America.

It was only natural that Ihab selected a career in the travel industry. His mother is one of Egypt’s top Egyptologists/guides who instilled in her son a love of history and travel. He began his career working in a travel agency in Egypt handling in-bound visiting tourists from all over the world.

After moving to the U.S. and purchasing Spiekermann in 1991, the Cairo-born Ihab decided to expand the business beyond his familiar Egypt. He began scouting nearby destinations which at the time were obscure and seldom visited by Americans, i.e., Jordan and Syria. It snowballed from there where every year or two he would offer new destinations.

Ihab Zaki earned both his B.A. in Economics and his M.A. in Middle Eastern Studies from The American University in Cairo.