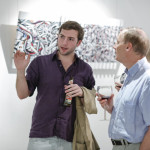 Harrison Love began his study of painting as a mode of communication. He developed as a realist painter first, building a foundation to best convey his thoughts and dreams. While his focus at the Rhode Island School of Design from which he graduated in 2008 was the allegorical medium of illustration, the kinds of art that have always interested him are conceptual and abstract — less about communicating narratively and more about communicating actually.

While working in Tokyo and in China, Harrison Love discovered a connection to calligraphy and the action of painting in one breath. He believes this visual language, imbedded with information, has a narrative action in itself and has been exploring this visual language in his own paintings in both form and color.