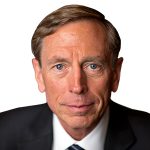 General David H. Petraeus, US Army (Ret.), is a Partner with the global investment firm KKR and the Chairman of the KKR Global Institute, which he established in June 2013. He is also a personal venture capitalist and serves on the boards of KKR companies OneStream and Optiv.

Before joining KKR, he served in government for 38-1/2 years, culminating his 37-year military career with six consecutive commands as a general officer, five of which were in combat – including the Surge in Iraq, US Central Command, and US/Coalition Forces in Afghanistan – and then serving as Director of the CIA, following Senate confirmation by a vote of 94-0.

General Petraeus graduated with distinction from the US Military Academy in 1974 and later earned a Ph.D. at Princeton University.

He has held academic appointments at USMA, the City University of New York’s Macaulay Honors College, Harvard’s Belfer Center, and the University of Southern California.  He is currently a Senior Fellow and Lecturer at Yale’s Jackson Institute for Global Affairs, Co-Chairman of the Woodrow Wilson Center’s Global Advisory Council, Senior Vice President of the Royal United Services Institute, and a member of the Trilateral Commission, Council on Foreign Relations, and Aspen Strategy Group.

His many awards include four Defense Distinguished Service Medals, the Secretary of State’s Distinguished Service Award, the Bronze Star Medal for Valor, two NATO Meritorious Service Medals, the Combat Action Badge, the Ranger tab, and master parachutist wings. He has also been decorated by 13 foreign countries and is believed to be the only person who, while in uniform, threw out the first pitch of a World Series game and did the coin toss for a Super Bowl. He was also runner-up for Time Person of the Year in 2007, when Russia’s President Vladimir Putin garnered that honor.

On this episode, General Petraeus shares his journey to the late 19th century for a dinner at the Lotus Club in New York City with then former President and retired General Ulysses S. Grant. He puts forward why and how the conversation would unfold.

During our interview, General Petraeus also provides perspective on cybersecurity, why Iran may be the next big crisis, managing China, the war in Ukraine, and our commitment to Afghan partners and refugees. Plus, he offers what he never travels without, why exercise and reading are critical diversions during grinding experiences, and why social media is another war zone.