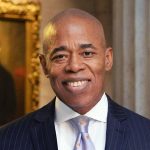 I’ve dipped into our show’s archive from over the last decade and bring you an interview I released on 8 January 2019, with New York City Mayor, The Honorable Eric L. Adams, while he was serving in his role as Brooklyn Borough President.

In our conversation, Mr. Adams shares his one way ticket to ancient Sumer. He also talks about what makes Brooklyn special, his vegan journey, and his plans for the city’s highest office.