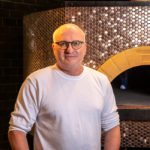 Erez Komarovsky is a chef, baker, and author, known as one of the founding fathers of modern Israeli cuisine. He launched “Lechem Erez”, a bakery which sparked the artisanal bread movement in Israel and grew to over 30 locations, before moving to the Galilee to open his cooking school. He also appeared as a judge on the cooking show Game of Chefs.

At Mint Kitchen, the elevated fast casual restaurant in New York City, Erez created a fresh and healthy ingredient-driven menu of modern Israeli cuisine inspired by his work in the garden of his Galilee home.