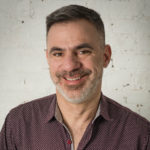 Rediscovering Travel: A Guide for the Globally Curious