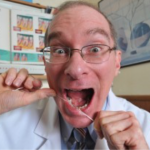 A graduate of New York University College of Dentistry, Dr. Charles Seaman has been practicing general dentistry since 1986, and has been the director of The Cambria Family Dental Center – a full service facility for children and adults, since 1989.

In addition to practicing dentistry and hosting a weekly call in radio show about dental care, Dr. Charles Seaman has composed music (since the age of 10!) and has written tunes professionally for film, television, musical theatre, cabaret as well as having penned commercial jingles. His song “Safe and Warm” was a Billboard Top 100 Country hit.