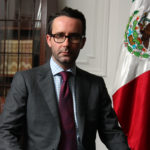 Ambassador Diego Gómez Pickering is an associate of the Mexican Council for International Affairs (COMEXI) and a member of the board of Child’s Fund Mexico and the American Society of Mexico. He is fluent in English, French, Italian, Portuguese and German. He as been awarded the Victorian Order as Knight Commander by the British government and the Antonio José de Irisarri Order as Knight Commander by the Guatemalan government.